The exhibition was the opening show at the new Hauser & Wirth Gallery in the arts district in Downtown LA, featuring 100 sculptures by thirty-four women. Of the 66 artists that Hauser & Wirth represent internationally, only 35% of those are women.

The show was heavily criticised for its inappropriate loans for a commercial exhibition. LA Times writer Christopher Knight asks the question: if this exhibition was so important for a revisionist feminist look at art history, why did none of the 13 major American museums who lent work from their permanent collections to this commercial exhibition put it on themselves? 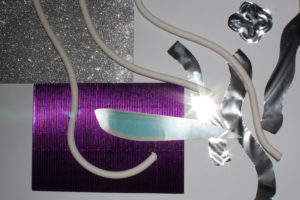 Walking around the show, I was impressed by the scale of the artworks and the vast range of materials used – leather, steel, burlap, cast aluminium, canvas, velvet, fibreglass, latex, foam, gold, tubular steel, concrete, polyurethane, light, clothing, found objects, plastic, paper mache, paper, earth. I think the variety of material used is refreshing. The artists were from all over the world, but the work was put in a chronological order from the 40s to present day, a sort of representation of what was happening at the time in abstract sculpture. I wondered if the earlier sculptors inspired some of the later ones.

The south gallery contained work the oldest work from the 1940s and 1950s by Ruth Asawa, Lee Bontecou, Louise Bourgeois, Claire Falkenstein and Louise Nevelson. This exhibition was focused on “subtle production”, the handmade, all of the work in the show was created by the artists in their private studios. There was an especially tactile feel to the work in this room, I could imagine it being created. I connected the works in this room through the emphasis on process, creation of ensembles and use of non-traditional materials (like woven wire, welded steel and canvas and glass fused to wire), if I didn’t know, I wouldn’t guess that they were created by all female artists.

My favourite works in the show were in the second room, from the 60s and 70s. Lynda Benglis’ ‘Wing’ and ‘Eat Meat’ (fig 2. and fig. 3) seemed wonderfully fluid, like frozen lava pouring from the wall and piled on the floor. The pouring of polyurethane over an armature for ‘Wing’ was forever captured in cast aluminium material. There is great drama and movement in these works. It’s so interesting to me to represent something ephemeral like the flowing of liquid in a very hard and permanent material. ­­

Eva Hesse created Aught and Augment (1968) (fig 1) using canvas covered in latex. In Augment, 19 sheets were stacked and overlapped on the floor. For Aught the sheets were taken and filled with rope and stuffing, then hung like panels on the wall. They blur the line between sculpture and painting because they have a fullness and you can see the shape of the rope hanging down inside. The latex on canvas looks tactile and strange, like skin. It has a soft glow.

One of the curators of the show, Jenni Sorkin, talks about the show as ‘not feminist but feminine’ – ‘examining the subtle production of women working in their studios’. Maybe I’m missing something but this feels like a hollow exhibition theme to me and it made me question: is there is gender in art? And why does the art world talk about ‘a feminine sensibility’? Feminist art is different completely, it’s political, about systematic gender inequality, but what is feminine art?

Pat Mainardi wrote that ‘Men have appropriated all of art to themselves. They have the freedom to be sensitive and delicate or bold and strong’. When women make art that is personal or delicate are they extended the same treatment? Pamela Allara discusses the critical reception of women’s work based on the assumption that art by men explains the world, whereas art by women explains their life.

Thinking about the feminist and feminine themes in art, I wonder: can you really separate yourself from the work that you make? Because to me, when I make something it becomes a visual representation of expression- my thoughts, my experimentation, me. I read about how the artist Buseje Bailey entered her work into a lesbian art exhibition in Toronto in the 90s. A woman from the selection committee asked ‘Where is the lesbian content in your art?’ Buseje had assumed that ‘one could not separate who one is from the work one does’ and was not included in the show. The committee had been looking for explicit sexual imagery in her work. How can you say her work is not lesbian enough if the artist is a lesbian? I think that what you make embodies who you are and what you think.

In my own experience as a final year art student, I have not experienced any gendered discrimination and have been afford every opportunity in my studies. I don’t think that sexism in art education is still an issue today. According to Pooley and Rowell’s (2016) report for The Crafts Council, in higher education crafts courses, 80% of students are female and male participation is falling year after year. Women are studying ceramics, glass, textiles, jewellery, general crafts, furniture, product design and animation more and more every year.

So is gender inequality in the arts sector still a problem? In higher level education, there are way more women studying art, but statistically, women are not getting as many solo exhibitions, being represented proportionally in the press or fetching as much at auction.